Local skateboarders were concerned  on what was going to be built, how the commitment during planning that the design would be worked with local stakeholders was being undertaken.

The attached plans are “the latest park design which shows the proposed wheeled/skate area in line with planning submissions.  The smaller area with some ramps etc. is located to the west of the overall area and the larger flatter concrete area is to the east of the facility. This has been submitted to planning who have not raised any initial concerns. However, planning still require to officially sign off this design.  Once we have the final sign off from planning this is the design which will be taken forward to construction.”

Northfield & Willowbrae Community Council received a petition from more than 20 local residents and have scheduled a meeting on the issue: Thursday 28 Feb, 6pm at St John’s RC Primary School. 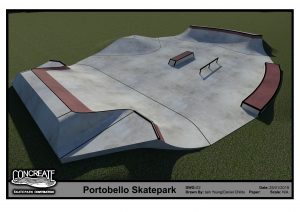